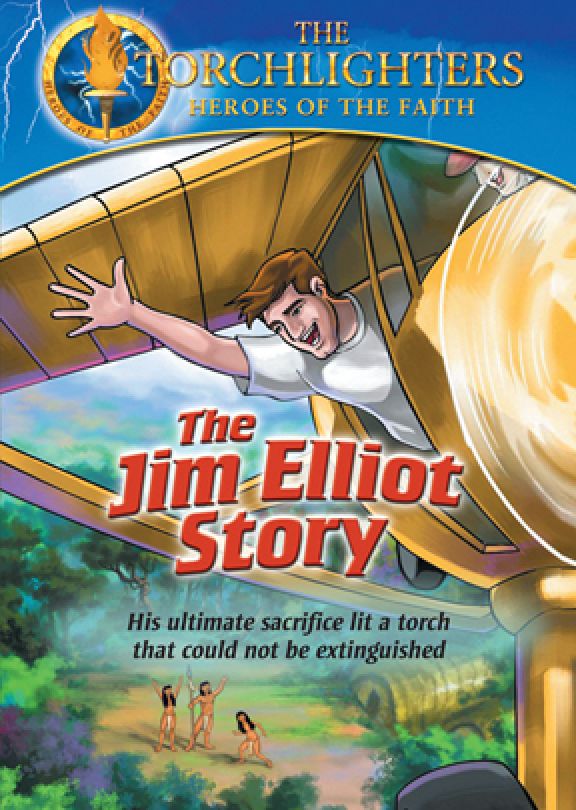 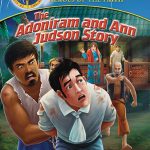 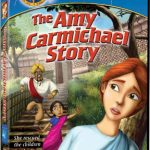 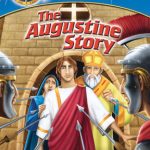 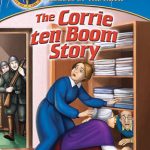 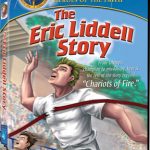 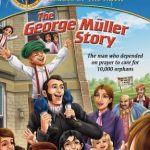 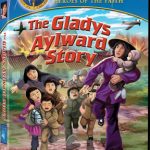 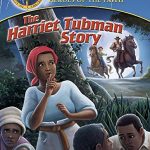 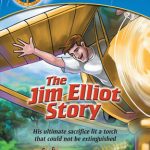 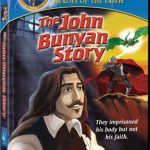 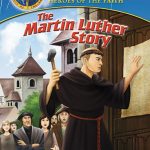 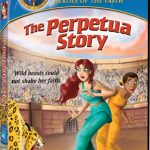 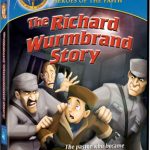 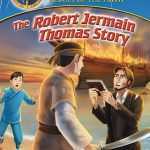 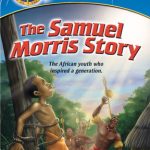 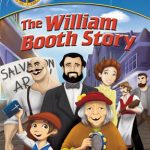 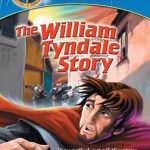 Jim Elliot: Jim Elliot has spent his youth preparing to share the Gospel with those who’d never heard it, but nothing could have prepared him for the dangers he faces in the jungles of Ecuador. The remote Waodoni tribe is suspicious and antagonistic when the missionaries begin to fly over their territory with peace offerings. How can Jim and his fellow missionaries break down the hostile barriers and carry a torch of faith to this unreached people group? Find out in this inaugural episode of the Torchlighters.

George Müller:George Müller lives on radical prayer, depending on God to supply all his needs without asking for a cent from anyone—not even the congregation he pastors! When he comes into contact with the neglected street children of the city of Bristol (England), he discovers that the workhouses force these desperate orphans into unpaid labor. George and his wife, Mary, open the first orphanages supported entirely by prayer, and God miraculously provides for their every need. But enemies of their work devise a plan to shut down the orphanages for good. Will George’s trust in God remain strong in the face of cunning opponents and desperate circumstances? Children and adults alike will see radical faith in action in this episode of The Torchlighters, Heroes of the Faith.

Adoniram and Ann Judson:Follow the extraordinary adventures of Adoniram Judson and his wife Ann as they work to reach souls in Burma, a land where professing Christ would mean certain death. When treacherous religious leaders falsely accuse Adoniram of spying, Burma’s ruthless king throws him into prison, leaving Ann and her unborn child to struggle alone. Will Adoniram escape death and reunite with his wife and child? Will their Bible translation, the only one of its kind, be lost forever? Find out in this episode of The Torchlighters.

Harriet Tubman:For centuries slavery reigned in parts of America, forcing an entire people into a lifetime of suffering and servitude. Living under the thumb of this oppressive system, young Harriet Tubman prayed ceaselessly that she and her family would be set free. Little did she know, God would use her and her resolute faith in Jesus to rescue not only her own family, but hundreds of other enslaved African-Americans as well. Discover how Harriet followed God, became the Moses of her people, and persevered despite seemingly insurmountable obstacles.

Martin Luther:In a world ruled by a corrupt and greedy church, all it took was one little nail, one well-written parchment, and one sharp-tongued monk to turn everything upside down! Martin Luther didn’t mean to spark the Reformation with his 95 Theses, but his realization that salvation comes through faith and not works ignited the revolution that changed the world. As Pope Leo X hounds and fights him at every turn, will Luther have the courage to stand strong—even to death?.

Robert Jermain Thomas:In the mid-nineteenth​ century, the hermit kingdom of Korea is determined to keep foreigners and Christianity out. However, one brave missionary will do anything to bring the light of God into this dark land. With the help of some Korean fishermen hungry for truth, Robert Jermain Thomas risks everything to smuggle in a treasure beyond all imagination. But what will his bravery cost him? And will the Word of God bring light to this dark kingdom?.

John Wesley:When young John Wesley is miraculously saved from his family’s burning home, his mother is certain God has a great purpose for his life. But years later John is still struggling to live out that purpose through good works. Finally, after years of anguish, John embraces saving grace through faith! But his new message is not welcome in the churches. Will John break all the rules and risk his life to bring the message of grace to the needy and the outcast?.

Corrie Ten Boom:Corrie Ten Boom and her family repair broken clocks and watches. But as the evil of World War II sweeps through their city, a new kind of “watch” comes to their care: an innocent Jewish baby. How will the Ten Booms hide this baby and others from the cruel Nazi invaders, and what will be the cost of serving God amidst unthinkable evils? When faith is tested, hope is tried, and love is strained, will Corrie’s God prevail? This gripping episode of the Torchlighters is an amazing story of courage, sacrifice, and forgiveness.

Augustine:Bright young Augustine thinks his mother’s religion is foolishness. With his “superior” intellect to guide him, he sneaks away from home to an important job and a new life of luxury in the city of Rome. When the empire decides to take over one of Milan’s Christian basilicas, Augustine prepares to give the speech of a lifetime to squash the Christians once and for all. With his devout mother and the peaceful Bishop Ambrose on one side and angry, armed soldiers on the other, Augustine discovers he must choose whom he will serve.

Samuel Morris:Young prince Kaboo is being held for ransom by a fierce enemy tribe who ties him to a pole and prepares to finish him off. Suddenly, a blinding light appears, and the ropes fall away! Kaboo hears a voice urging him to run. While stunned warriors look on in fear, Kaboo escapes into the African jungle and stumbles upon a mission complex, where he learns of his heavenly Father who paid the ransom for all! Taking the new name “Samuel Morris,” he follows where the Spirit leads and shares his newfound faith with all who will listen.

William Booth:The pub owners and their hired thugs are ready for William Booth and his ragtag followers when they come marching into London’s East End. With clubs and rocks, the thugs are set to chase this preacher out of town once and for all. But William and his “Salvation Army” are not so easily dissuaded! Armed only with Bibles, musical instruments and their unflinching faith, they march in to face their most dangerous opponents so far. Who will win the spiritual battle for the hurting souls of this forgotten corner of London?

Amy Carmichael:﻿As little Preena is snatched away from the most gentle woman she has seen in months, she wonders how she will ever again escape from the temple to find the missionary who wears a cross and serves a different sort of God. Meanwhile, Amy Carmichael is consumed by the awful truth she has learned about the plight of the “temple girls.” Will Amy’s faithful determination be enough to free Preena from the powerful customs and superstitions that keep her hostage?.

Perpetua:﻿It is the year AD 203 in Carthage, North Africa. Perpetua, an affluent young mother, is charged with converting to Christianity and is sent to prison without her baby. Her freedom would be secured easily, if she’ll simply offer one pinch of incense in honor to the Roman gods. What will her decision be? Perpetua’s diary captures one of the most influential, true stories of the Early Church. Share the story of this Torchlighter with a new generation!.

Richard Wurmbrand:In war-torn Romania, there is only one way for churches to get the protection of the government: give their support and allegiance to the communists who are in control. Instead, Pastor Richard Wurmbrand chooses to speak up for Christ, thereby placing his own life and the lives of his family in great danger. When Richard’s choice lands him in a communist prison, his faith and witness are tested to the limits. See how this Torchlighter’s amazing story continues to impact the world today.

Gladys Aylward:With war raging about her and soldiers closing in, this brave missionary sets out on the most difficult journey of her life: a 100-mile trek over the mountains to a safe haven. But it’s not her own safety that concerns this little woman with big faith; it’s the safety of the 100 orphans in her care. Watch as Torchlighter Gladys Aylward’s strength and faith are stretched to the limit in WWII China.

Eric Liddell:All of Scotland is eager for their running celebrity Eric Liddell to sprint past the rest of the world and bring home Olympic gold in the 100-meter race. But when Eric makes the stunning announcement that he won’t race on Sunday because of his religious convictions, he is soon labeled a disgrace and a traitor. See how this Torchlighter’s famous stand during the 1924 Olympics prepares him for even greater challenges as a missionary to China during World War II.

John Bunyan:John Bunyan spends his days in prison, separated from his wife and children. Living in the cold, stone cell is the price he pays for going against the established state religion. If only he would agree to stop preaching, John could walk out a free man! Why does he choose to stay in jail, and how will he serve his Lord in this wretched place?

William Tyndale:William Tyndale tops King Henry VIII’s “Most Wanted” list in 1535 and is being pursued across Europe by the king’s bounty hunters. What is his crime? Murder? Theft? No, William’s “crime” is translating the Bible into English for the common people. Watch as this Torchlighter risks his life in order to bring the Scripture to all.